The primary motivation of this suggestion is to let StarkNet have fast finality, which is economically backed by a lot of stake. We also try to leverage Tendermint - a well-established BFT protocol deployed on numerous blockchains.

On the downside, due to the quadratic complexity of Tendermint, this suggestion limits (in practice) the sequencers amount to a few dozens. However, since sequencers can’t include invalid transactions as everything is proven to Ethereum, there is appealing to have a more performant algorithm with only a few active validators each time, compared to similar potential designs for L1s.

Since Tendermint includes slashing, all the stake has to be managed on L2.

Proposers (i.e., sequencers) will be chosen according to their stake. The randomness source and algorithm for selecting the specific sequencer for each slot are out of scope.

Each proposer will be chosen for a concise period (around 2-10 seconds) and is expected to behave as described by the Tendermint protocol. It is recommended to read the Tendermint whitepaper if you are not familiar with it. If you need only a refreshment, here is the Tendermint flow in one draw: 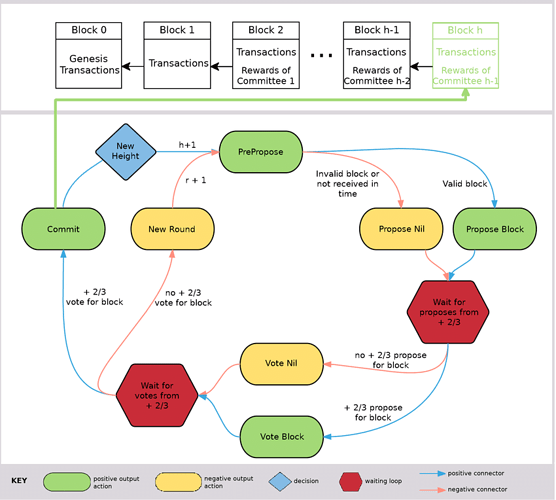 850×764 70.5 KB
To align honest and rational behaviors, we add the following slashing rules to Tendermint (similar to what’s the Cosmos SDK is doing):

Once a block of StarkNet is committed, it is final and cannot be reverted unless >⅓ of the stake of the system is slashed.

To couple incentives between the sequencer and prover in the best way possible, we want to create a protocol in which any sequencer might get requested to become a prover. Such property has several advantages:

However, such design also has several notable disadvantages:

Crucially, observe that the sequencers don’t know when they participate in the Tendermint what block is the last block to be proven next, and how the prover will be shuffled from this block’s signers. This means that it’s impossible to be a sequencer without being a prover.

In addition, the identity of the eligible prover (i.e., the sampling algorithm given the signatures on the height-X block) is also part of the proof.

The selected prover has a limited time to generate a proof - T_1 hours after the previous proof has been submitted. If the selected prover fails to create proof (either because it is malicious or due to honest power failure, etc.), anyone can generate proof for T_1 additional hours. Shall this happen, the protocol slashes the original prover, and rewards the proof submitter.

As a rule of thumb, it is safe to assume that a proof would arrive at the second window, as such event would cause all the sequencers to lose some stake. A detailed treatment of this edge case is discussed below.

When a proof doesn’t arrive - Handling inactivity in the network

Inactivity happens when L1 expects a new proof to be submitted, yet no such proof arrives. On L2, inactivity might occur due to the two possible scenarios:

This is challenging, as L1 is unaware of the reason behind the delay and has no information on who should be punished.

The suggestion is to allow this to happen through:

On the downside, due to the quadratic complexity of Tendermint, this suggestion limits (in practice) the sequencers amount to a few dozens. However, since sequencers can’t include invalid transactions as everything is proven to Ethereum, there is appealing to have a more performant algorithm with only a few active validators each time, compared to similar potential designs for L1s.

Tendermint communication complexity is O(nlogn), not quadratic, and it’s been demonstrated that a Tendermint chain can have >100 validators (e.g. see the Cosmos Hub).

Deciding on the right way to do the sequencer <> prover interaction is also something of interest, especially given that in a BFT protocol there’s no real “leader” who commits the block. Maybe the prover is always the proposer for that round?

Thanks on the complexity correction!!

Regarding the Sequencer<>Prover, our line of thinking is that the prover would prove a sequence of blocks. WDYM by “commits the block?”

So my perspective on how to design these systems comes from less of “how does one decentralize a rollup sequencer” and more of a question of “ how does one improve the assumptions of the IBC client bridge model with modular data availability assumptions and STARK validity proofs”….

Starknet would like to modularize this architecture in two ways. It would like to bridge interoperate into and out of a Cairo virtual machine that provides succinct validity proofs through Starks so that the bridge does not have rely on BFT assumptions for correctness.

Starknet would also like all transactions relevant to the bridge to be published on counterparty Ethereum chain thus relying on the Ethereum chain for data availability.

Another thing I observe is that efficient correctness/ fraud proofs of Cosmos staking, reward distribution, slashing and governance modules are very challenging because they touch a lot of state during normal state transition function. It’s very appealing to fall back to standard BFT assumptions for the correctness of these functions.

So all this analysis leads to a fairly clear architecture. There is a Cosmos SDK chain which contains a Starknet staking token. The Starknet staking token is bridged using standard BFT assumptions to the outside world. There would be a modified gravity bridge that informs enables transfers of the Starknet token to and from Ethereum and informs the Cairo bridge of the current stake weight on the Cosmos chain of validators. If you are willing have all the economic punishment on the Cosmos chain side then the Cairo bridge only needs to know about the current set of validator public keys that can propose a new Starknet block and details of Tendermint leader election can be omitted.

There is a Starknet specific module that will need to be written that handles agreement on Cairo related state within the Cosmos state. There is a bridge into the Cairo VM from Ethereum that provides Cairo execution with L2 security guarantees for everything in the Cairo VM.

It seems like this architecture would also enable adopting Cosmos ecosystem’s forthcoming MEV mitigation systems like an encrypted mempool could be incorporated into Starknet.

I tend to think of this architecture as a less ambitious intermediary step towards what Celestia is building.

The Celestia repo has a high level proposed alternative to Cosmos reward distribution module that is efficiently fraud provable.

Deciding on the right way to do the sequencer <> prover interaction is also something of interest, especially given that in a BFT protocol there’s no real “leader” who commits the block. Maybe the prover is always the proposer for that round?

Combining the prover and proposer is a clean and elegant solution. I wonder whether it does not incentivize “lazy censorship.” Namely, a proposer can propose a block that is later easy to prove to preserve the prover’s computational resources.

@gakonst How is the O(nlogn) achieved? I was reading/thinking about the Tendermint protocol and AFAIU it seems to have O(n^2) complexity in a “normal scenario”, and O(n^3) in the worse case

Ok, this is what I found out. It may not be accurate, and it is possible that Tendermint does not use precisely the following method, but I am guessing that it uses something similar:

The complexity reduction is achieved by finessing the method used to broadcast messages. Instead of each node broadcasting its message to all other nodes, the following can be done:

This makes the communication complexity O(n), but note that the size of the messages sent is O(n^2)