Proposal for a standard L2->L1 bridge, for tokens minted on StarkNet

The proposal is not (yet) formulated as an official improvement proposal and is currently presented to gauge the interest and get feedback.

So even if there is no immediate need to deploy the token on L1, minting has to be initially done on L1, and only then bridged to L2. This creates unnecessary cost overhead and requires the deployer to be knowledgeable of development in both environments, and their bridging functionality.

Furthermore, if token governance is handled on L2, it makes little sense to create a complex L1 token that mimics the functionality of the L2 token.
It should be possible to mint the token on L2, and then easily port it to L1, keeping only the functionality required to enable interoperability and settlement. ( e.g discussion thread)

This proposal describes a standard that enables developers to first mint tokens on L2 and then use a known and secure bridge to port the token to L1.

The standard heavily uses the ability of StarkNet’s L1↔L2 messaging. The mechanism allows messages to be passed relatively quickly between L2 and L1, by any contract and with any data. This allows for both fungible and non-fungible assets to be transferred without relying on third party liquidity providers or waiting for long timeouts.

The standard requires the following components:

The interface has the following functions

Sends the message to the known L1 bridge. The message passes the contract address, the token name, the token symbol.
(In ERC721 it should also send the URI of the token and possibly other metadata)

Once an instance on L1 is created, tokens can be bridged directly from the contract to L1. 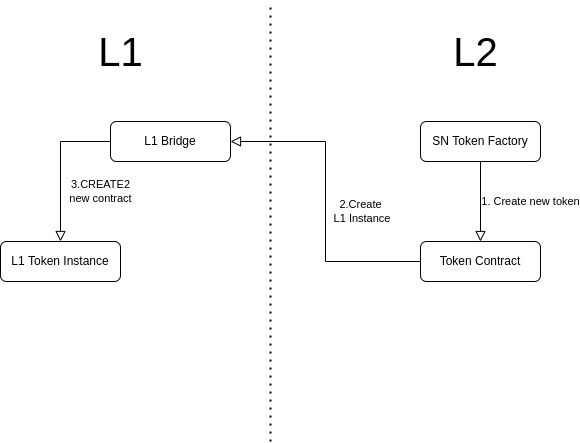 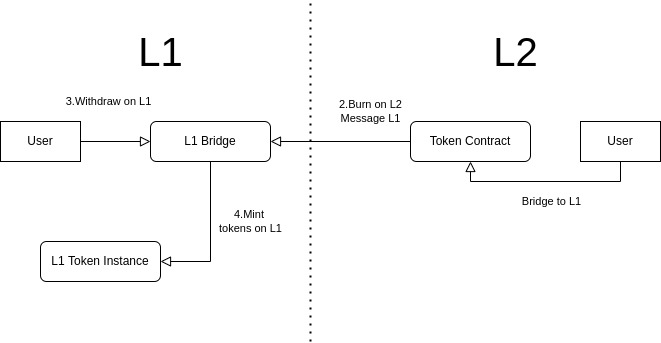 Example flow of bridging a token to an L1 instance

An example implementation for both L1 and L2 can be found here:

The following contracts have been deployed to StarkNet and Goerli testnet to demonstrate functionality:

This implementation is only an example. To make this proposal concrete, both the L1 bridge and the L2 interface should be finalized and implemented by serious people

Thanks. The technical aspect can be changed. The implementation given here is more for reference.
The purpose was to get an idea of how many find this useful, and how much should this be pushed forward as a standard.

Can you please elaborate on how would you use it?

I really like the idea. I definitely think it would be useful, and especially in terms of security. The decoupling of bridging functionality and the logic of the token is a good thing.
+1 to make it an official proposal

Let’s try to push this forward.
I might need to make some modifications following recent changes of deployments, but keep the same idea

Congratulations @amanusk for your work. I believe your proposal would be very beneficial for the community and should be considered official.

During our last voice call, we discussed the possibility of extending it into a standard for a two-way bridge L1-L2 / L2-L1 for NFTs (ERC-721 and ERC-1155).
This option should be given careful consideration as soon as possible because it could alter your initial proposal, such as the use of the burn function.

Screenshot team and I would be willing to contribute to the development of this proposal.

Great to have you on board!

Indeed the considerations and requirements for ERC-721 and ERC-1155 can be different.

Let’s continue the discussion here.
We can use the repository to coordinate a reference implementation. If we want both L2->L1 and L1->L2 contracts following a similar idea, we would need Solidity contracts, so this can be advance regardless of Cairo 1 status.

Some points we can consider for ERC-721 implementation: