Proposal to include Ethereum Network Validators in Token Distribution

Intro: wish to start discussion around this idea, I am making the case that Ethereum Validators should be included in L2 token distributions. This is a draft proposal, primarily to get discussion and feedback.

r/ethfinance - Beacon Chain validators should be included in L2 airdrops

Intent: Include Ethereum network validators in StarkNet token distribution. This proposal targets solo validators who made at least one deposit to the Beacon Chain. This excludes LSD (liquid staking derivative) token holders and staking as a service customers.

Onboarding ecosystem-aligned actors who have proven their early dedication to Ethereum. These Beacon Chain depositors are likely to partake in governance and node operations on Layer 2, arguably more so than basic users of L2s.

Currently 10,182 addresses and is up to date until the end of June 2022, RPL node operators are included using their withdrawal addresses. This is an attempt to gather addresses belonging to individual stakers in full control of their nodes.

Rewards should be on the basis on whether an eligible deposit was made and not number of validators, the list contains all unique addresses that made a valid deposit to the Beacon Chain, addresses belonging to centralised exchanges (such as Coinbase/Kraken), LSD services (such as Lido/Stakewise) and contracts have been removed.

Airdrop Allocation: TBD pending discussion on this post. Currently 9% is allocated for Community provisions, and 8.1% is unallocated

StarkNet Alignment:
The design of the StarkNet Token is shaped by the need to power a net-work that is composed of (i) Users of StarkNet, (ii) Operators — peo-ple providing the network with computing resources that perform se-quencing of transactions, generation of STARK proofs, and long-term storage providers, and (iii) Developers writing software for its infra-structure and for applications running on it.

Distribution is highly important, not only wide but also targeted to a diverse and valuable set of stakeholders. Rewarding ecosystem aligned participants will bring value to StarkNet governance. Validators have locked ETH and operate nodes to secure Ethereum via proof-of-take consensus, this is the fundamental infrastructure layer for Ethereum.

Once deposited to the beacon chain contract validators have committed a non-trivial amount of capital until the merge, they must be positioned for long term success of Ethereum. They must provide physical infrastructure or pay for it to keep your validator active on the Network, which incurs electricity costs, hardware costs, internet provider costs and time/effort for maintenance.

Considering the token utility of participation in StarkNet’s consensus mechanism, it would make sense to include those actors that are likely to support these operations.

Validators have:
Proven: aptitude to run node operations and service the network
Proven: long term alignment with Ethereum, especially pre-merge
Proven: ‘proof of work’ actual resources and effort is spent to secure the network, and this cannot be gamed.

As such, validators should have a say in the development of L2 networks, and would be a set of participants that bring value to L2 and a strong foundation of network shareholders primed to run the decentralised node set of the L2.

Benefits to both StarkNet & Ethereum:

For StarkNet
Onboard a strong set of ecosystem aligned users, that will bring value

Value to governance: this set consists of builders/devs & very dedicated early supporters, proven by commitment to early risk pre-merge. Those responsible for the base networks security/infrastructure should have voice in the direction of layer 2.
Strengthen the future node set: ensure a strong foundation of the StarkNet community to run the nodes and decentralised sequencers when they are ready. Many validators have expressed interest to run nodes/sequencers on layer 2, and it will be trivial for existing validators to add to existing operations. L2 networks should aim to have a decentralised node set that is run by the community with many node operators, and not in the hands of a few institutions.

For Ethereum
Layer 2 is essential for Ethereum to reach mass adoption, Including these participants sends a strong signal of rewarding meaningful support that will have positive effects on L1 that will benefit the L2 layer by having a stronger foundation.

Centralisation of ETH staking is a growing concern for Ethereum, and proof of stake. Ethereum has prioritised decentralisation & sustainability, allowing end users to participate in network consensus. However, the conditions of the merge timeline has allowed centralised institutions to gain a large market share over individual stakers. 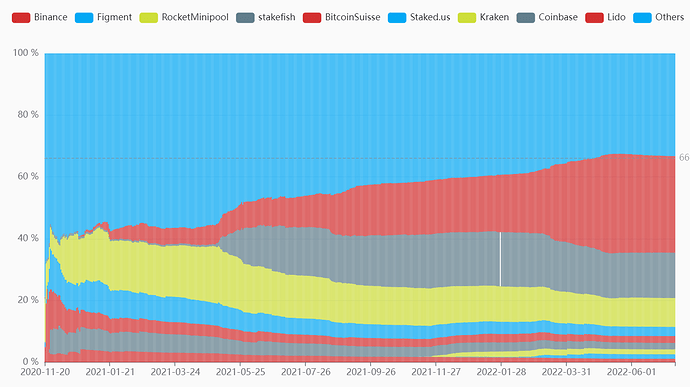 LIDO (stETH) accounts for 31.30% of deposits to the beacon chain. LSD holders benefit from liquidity without needing to lock ETH or run nodes, this allows additional yield to be earned in DeFi on top of the base staking yield. It is currently more profitable and easier to stake with a service like Lido than it is to run your own validator, all work and maintenance involved in running a validator/s is abstracted away and handled by a centralised institution, this has hindered unique validator growth harming the network’s security/decentralisation.
Coinbase accounts for 14.61% % Kraken 9.35% of Beacon chain deposits, by allowing users to stake their ETH through their exchange. This means a single entity is holding this ETH and staking across their own validators, not only is this damaging to network decentralisation, a single entity holding this much is a massive honeypot for hackers.

We see a trend where individual stakers (‘others’ in the chart above) are diminishing, centralised institutions are catching up as the incentives for solo validating simply struggle to compete with current LSD. Execution risk of the merge has some influence over this, but even post merge due to the ease of LSD allowing holders to gain exposure to yield, have liquidity and earn additional yield in DeFi. We are still likely to see favour in LSD, APY is simply not attractive enough for the majority of would be Stakers to lock up/join the exit que and have to maintain node infrastructure when similar results can be achieved via LSD.

This has the potential to turn the tide on the current problem of Ethereum’s increasingly concerning centralisation.
By creating external incentives to run solo validators, many more ETH holders will be willing to put the extra work in running their own validator for the additional incentives. increased ‘implied’ APY, this will take market share away from CEXs and LSDs. It is also likely that other L2s and projects will follow suit. A stronger Ethereum foundation is beneficial to any layer 2 that relies on the trust assumptions/security of layer 1.

We see a similar effect with other external incentives: Gitcoin participants have become increasingly included in project airdrops. resulting in increased ecosystem funding, though the motivations may be profit seeking it does not detract that this creates an environment where more public goods are funded. Governance participants, many who would have been apathetic to governance voting, are much more likely to pay attention and contribute to these activities when active voters in proposals are included in project distributions.

Why the exclusion of LSD holders, and exchange depositors:

Because this has been brought up in previous discussion, the following explains the main reasons

I think this is a good proposal. It’s a pity that traders on testnet before the announcement can’t get rewards

I definitely need to digest and think more, and what I’m saying here is not “formal” StarkWare/Net endorsement but just my initial personal reaction.

Honestly, I’m lukewarm on this one.

I would prefer tokens to be rewarded via GitCoin grants or via specified bounties for tooling rather then airdropping it to people who might be motivated to contribute to the ecosystem…but probably won’t be.

I would definitely still be for this airdrop over dropping it to random StarkNet users.

I have updated GitHub - GLCNI/ETH-Solo-Validator-Addresses: unique ETH addresses belonging to solo stakers this includes every depositor to the Beacon Chain until the Merge on Sept 15 2022. There are 12,775 validators in the solo-validator category of which I believe the vast majority would be prime candidates to run StarkNet infrastructure on its path to full decentralization.

On the improvements
#reviewed for false positives, filter list has been greatly improved
#Coinbase accurately identified and is the main culprit accounting for 86% of the unique addresses depositing to beacon chain contract. This is due to the way they conduct deposits, with a fresh new address generated per deposit.
#Most staking as a service/LSD providers deposit through a contract and are not included in the list by default